Government wants to extinguish Foundation and pass Magalhães for Education 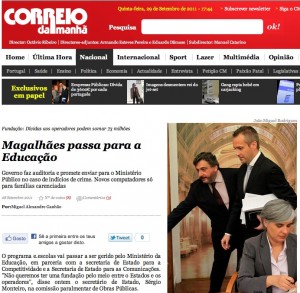 According to daily newspaper Público, the Secretary of State for Public Works, Transport and Communications, Sergio Monteiro, wants to end the Foundation for Mobile Communications (FCM), used for contractually the distribution of Magalhães computers with JP Sá Couto. FCM currently has a debt amounting to 65 million euros, at least.

The secretary of state explained that after the end of the Foundation, Magalhães computers will be managed by the Ministry of Education within a partnership with the Secretary of State for Competitiveness and the State Secretariat for Communications.

The Ministry of Education will also be responsible for defining the content for new computers. According to the Correio da Manhã, Sergio Monteiro says that “computers are irrelevant if they do not have content”.

However, the new wave of distribution of computers shall be addressed only to the neediest families: “There will be another euro budget for Magalhães” said the secretary of state.