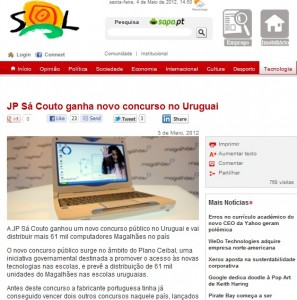 For the third consecutive time, the company thta produces Magalhães laptops, JP Sá Couto, won a competition in Uruguay for the distribution of 61 thousand computers in schools of that country.

According to the newspaper SOL, the contest launched by the Ministry of Education and Culture of Uruguay is part of the Ceibal Plan, “a government initiative aimed at promoting access to new technologies in schools”.