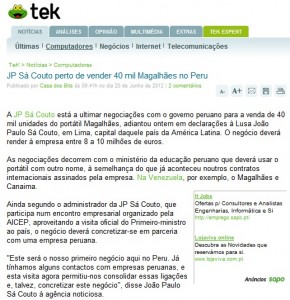 According to the news portal Tek Sapo, the company that produces the Magalhães computer is in negotiations with the Peruvian government to sell 40 thousand laptops, said yesterday the director João Paulo Sá Couto to Lusa Agency.

According to the news, the contract should be established in partnership with the Ministry of Education of Peru and a Peruvian company, and will yield the company nearly 10 million.