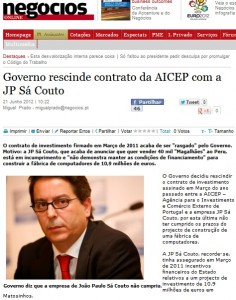 According to the order published today in Diário da República, the Government terminated the investment contract signed in March 2011, between AICEP (Agency for Investment and External Commerce of Portugal) and JP Sá Couto, for lack of compliance deadlines for the construction of a factory of computers and other products.

According to Jornal de Negócios, the project in Matosinhos, worth 10.9 million euros, would create 200 jobs and achieve a sales figure of 3,281 million euros in 2016.

Once terminated the contract of investment by the Ministries of Foreign Affairs, Economy and Employment, the project will no longer receive funding and the company JP Sá Souto will be required to repay the financial incentives received by the State, “plus compensatory interest under the deadlines legally and contractually provided”, says the document.