Magalhães laptops in nearly 50 countries around the world 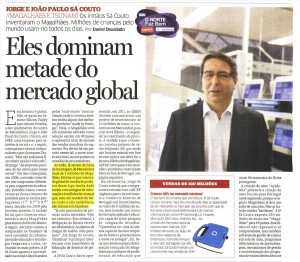 JP Sá Couto exports 250 million in Magalhães laptops to 49 countries, revealed the company in a report of the project “O Norte faz Bem” from the newspaper Jornal de Notícias  (JN), published yesterday in the printed version, which aims to promote entrepreneurship in the North of the country.

On the horizon, the Matosinhos company plans to set up assembly plants abroad, particularly in Angola and Panama, and to implement the “Magalhães 2.0″, a project that integrates the computer, school and educational contents.

According to JN, despite the recent cancellation of a project to build a new factory, by the current administration, JP Sá Couto says it is studying with AICEP (Agency for Investment and External Commerce of Portugal), an investment of 5 million for the installation of an ‘Academy’ for management and monitoring of educational programs aimed at Ministries of Education of each country.