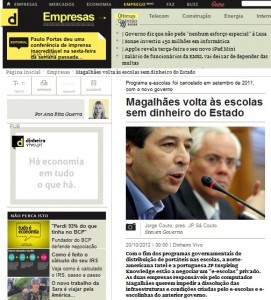 A year after the suspension of the program ‘e.escolinha’, in September 2011, by the current government, JP Inspiring Knowledge is preparing to negotiate with Intel, the creation of a similar program, supported by private funding, that allows to continue with the distribution of Magalhães laptops to students of 1st cycle of basic education.

According to the news published in Dinheiro Vivo, the director of Intel Iberia, Norberto Carrascal, confirms that “measures are being taken to resume the educational project in Portugal”, in an attempt to recover the infrastructure and conditions created during the operation of the educational program.

However, during the cancellation of the program, the Minister for Education and Science, Nuno Crato, made ​​clear the government’s position on this initiative, which did not prevent Prime Minister Passos Coelho promote the Magalhães computer outside the country, as happened when the visit to Mexico at the end of last year.