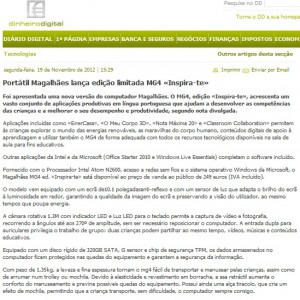 JP Sá Couto launched last week a new edition of the fourth version of Magalhães laptop: the MG4 “Get inspired”. The limited edition of MG4 presents a set of educational resources for use in the classroom and some hardware upgrades, such as increased memory, rotating camera, light sensitive screen and readjusted design, according to the news site Dinheiro Digital .

In addition to the programs installed in previous versions, MG4 “Get inspired” allows access to other educational contents, such as “EnerCasa” on renewables,” My Body 3D” on the human body, “High Note 20″ and Classroom Collaboration” to work in the classroom.

The new edition of Magalhães computer is available for sale to the public at a price of 249 euros.

This entry was posted in News and tagged Learning, Contents, Education, Magalhães, MG4. Bookmark the permalink.