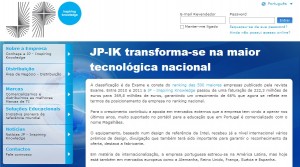 According to the press published on the company’s website, the Exame magazine published a ranking in which JP Inspiring Knowledge (IK-JP) is in 67th ​​place of the top 500 companies nationwide.

As in the market for technology sales, the company leads the top-selling, just after brands like Samsung and IBM in second and third, respectively.

In the same document, JP IK claims that the company’s growth is due in large part to the bet on the international market with the exportation of Magalhães laptops.