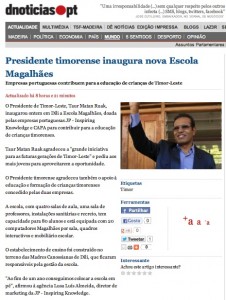 The Timorese president, Taur Matan Ruak, who today inaugurated the new school, thanked the support of the Portuguese companies to education and training of Timorese children, according to the news site dnotícias.pt.

The school has a capacity for 80 students and is equipped with 20 Magalhães computers and interactive whiteboards in each of the four classrooms.

In a press release, the administrator of JP – IK, Jorge Sá Couto, ensures that “the school will be an important contribution to East Timor to achieve one of its main goals: the achievement of the Millennium Development Goals of the United Nations Education”.