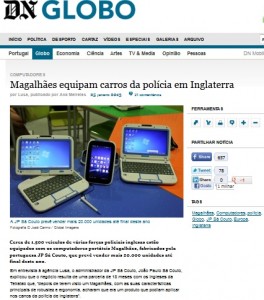 Close to 1,500 English police vehicles are equipped with Magalhães computers, manufactured by JP Sá Couto which is preparing to sell more 20,000 units by the end of the year.

According to Diário de Notícias, the company revealed to Lusa that the laptop is the “ideal system for emergency cars, police and other business areas to explore.”

In accordance is also the ex-cop and commercial agent of the United Kingdom Tetratab, Roger Marsden, who explains the bet on those Portuguese laptops: “The only option was too expensive and then noticed this equipment JP Sá Couto, and we thought, if it was sturdy enough to be used by children, so it was also good for the police, who are like children and throwing things to the ground”, he joked.