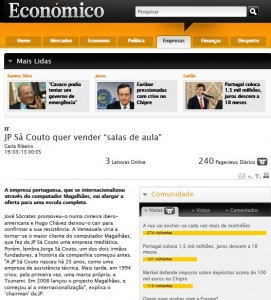 The company that produces Magalhães computers, JP Sá Couto, revealed to the Diário Económico, its intention to sell full classrooms with technology: “More than computers, we need to sell classrooms, to commercialize improvements in access to technology in the classroom”, explains António Rainha, from the department of innovation and development.

In December 2012, the company, along with a builder of prefabs, designed a school named Magalhães in Dili, East Timor, equipped with interactive whiteboards and 20 Magalhães laptops in each of four rooms.

Remember that since 2008, the company has produced more than five million of Magalhães laptops for the market of Education to 72 different countries.