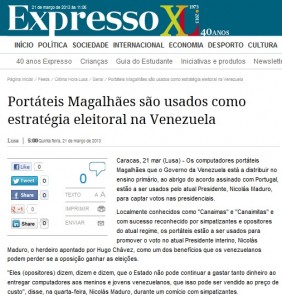 The successor of Hugo Chávez to the presidency of Venezuela, Nicolás Maduro, is using Magalhães computers, locally known as Canaima, to promote the political campaign.

According to Agência Lusa, in the newspaper Expresso, the candidate for President, Nicolás Maduro said that if the opposition wins the elections, Venezuelans will no longer benefit from the program of distributing laptops.

For the opposition, distributing computers for free, or at reduced cost, to children in the 1st cycle of basic education, is seen as a major expense for the state, given the difference in value of the real cost.

Like the Venezuelan campaign in April 2009, the Portuguese Socialist Party, led by former Prime Minister, José Sócrates, displayed images of children with Magalhães computers to promote the campaign in airtime party.