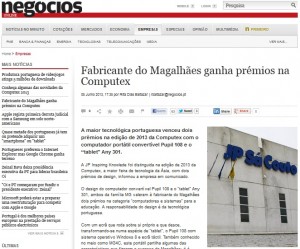 JP Inspiring Knowledge received two awards for the design of new Magalhães computers, in the 2013 edition of the largest Asian technology fair, Computex.

The winning models in the category “Computers and systems” for education were the computer Pupil 108 convertible, equipped with Windows 8, and ‘tablet’ Any 301.

According to the Jornal de Negócios, the president of JP Inspiring Knowledge, Jorge Sá Couto, highlighted the company’s continued success in collecting international prizes, mentioning that the prize of Computex is the fifth of the Portuguese company, only in 2013.