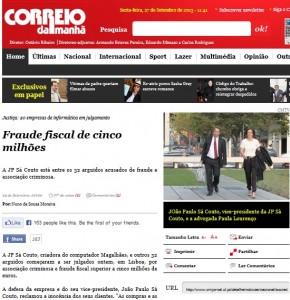 The company that produces the Magalhães computer, JP Sá Couto, began yesterday to be tried for conspiracy and tax fraud in the amount of 72 thousand euros.

At issue is the investigation of the case “carousel” known for leaking to the Treasury by 20 computer companies. The state now claims an amount exceeding 5 million for non-payment of VAT between 2001 and 2002.

According to the Correio da Manhã, the defense attorney of JP Sá Couto has claimed that “the purchases and sales made ​​by JP Sá Couto are absolutely normal” and the prosecutor is only concerned because of some “presumptions of Treasury officials”.

This entry was posted in News. Bookmark the permalink.