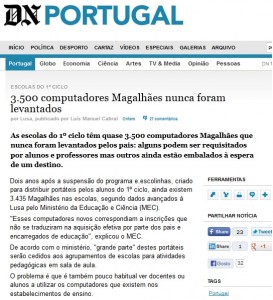 Two years after the suspension of the ‘e.escolinha’ programme, 3,435 Magalhães computers are yet to get at schools of the 1st cycle of basic education throughout the country.

The data were revealed by the Ministry of Education and Science (MEC) to the Lusa Agency, according to the newspaper Diário de Notícias.

The ministry said the new computers derived from”registrations that have not resulted in effective acquisition by parents and guardians,” predicting the distribution of these laptops to clusters of schools, in order to conduct activities in the classroom.

According to Lusa, Magalhães laptops are little used by teachers and students, as one of the reasons, is the lack of access to wireless Internet in schools.

This entry was posted in News and tagged Education, Magalhães. Bookmark the permalink.