Magalhães must have new route 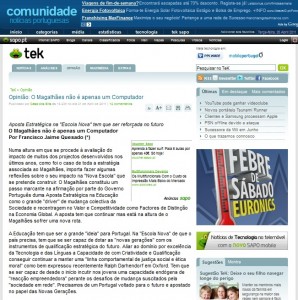 The expert in Strategy, Innovation and Competitiveness, Francisco Jaime Quesado, believes that the competitive advantage for Portugal is the focus on what he calls “New School”. The country needs “to equip new generations with qualification tools for the strategic future”, he explains in an article published on TeK Sapo.

Jaime Quesado argues that the Magalhães computer was a bet of distinctive value on the global economy, but “it’s time for Magalhães to get a new route”. Therefore he strengthens the role of education as “the effective change driver of building a stronger cultural identity “.

This entry was posted in Opinion and tagged Economy, Education, Magalhães. Bookmark the permalink.