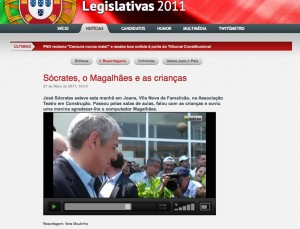 The Portuguese Socialist leader, José Sócrates was interrupted by a student who thanked him for delivering Magalhães computers.

Doing campaign, in the North of the country, the candidate for prime minister replied that the government distributed Magalhães computers so that “in the future”, students could handle “well with the Information and Communication Technologies”.

This entry was posted in News and tagged Children, Magalhães, Sócrates, ICT. Bookmark the permalink.